A friend sent me a story this morning that describes how officials in New York City have been frustrated with the city’s domestic violence problem, “Domestic Abuse Killings Climb as Murders Drop, Frustrating New York Officials.”  Among several issues, the story highlights the “spotty coordination and communication among the police, prosecutors, city housing officials and organizations that provide services to victims.”  This lack of information-sharing is not unique to New York City or any other jurisdiction.

I’ve often observed, quizzically, that a field so focused on “power and control” issues has so many power and control handicaps in addressing solutions associated with intimate partner violence.  One agency won’t share information with another for political reasons; one organization has a personal vendetta against another competing for funding; a national nonprofit has competing interests for exposure and support from a state and/or local nonprofits, etc.  Over the past two years researching how “things work” in this field, I’ve seen it all.  Power dynamics are at play that are counter-productive and antithetical to the mission of attempting to find real solutions to this social epidemic. But, I get it. The same fiefdom battles are present in corporate America.

Luckily, as an outsider to this work, I have a unique vantage point devoid of turf battles.  Also lucky for me, I have a decade’s worth of insight on how to engage a disparate community focused on a singular mission. Who knew my enterprise social expertise would serve me well in exploring innovative ways to make a difference on this thorny social problem?

Serendipitously, I discovered the work the High Point Police Department (HPPD) was doing with its groundbreaking domestic violence program early into Big Mountain Data’s launch.  There were a number of programs and areas I wanted to explore with HPPD as an entrepreneur who had a lot to learn to get up to speed, so I invited the agency to join our Yammer network. I created an external network where we could focus on different projects and initiatives in a friction-free, egalitarian network. Over the past two years, about 40 different individuals have joined the network.  It includes law enforcement, film directors, university researchers, national experts on Domestic Violence, crime analysts, data scientists, producers, writers, and attorneys.  This unlikely team of allies came together to lend expertise to a number of projects we’ve been exploring. 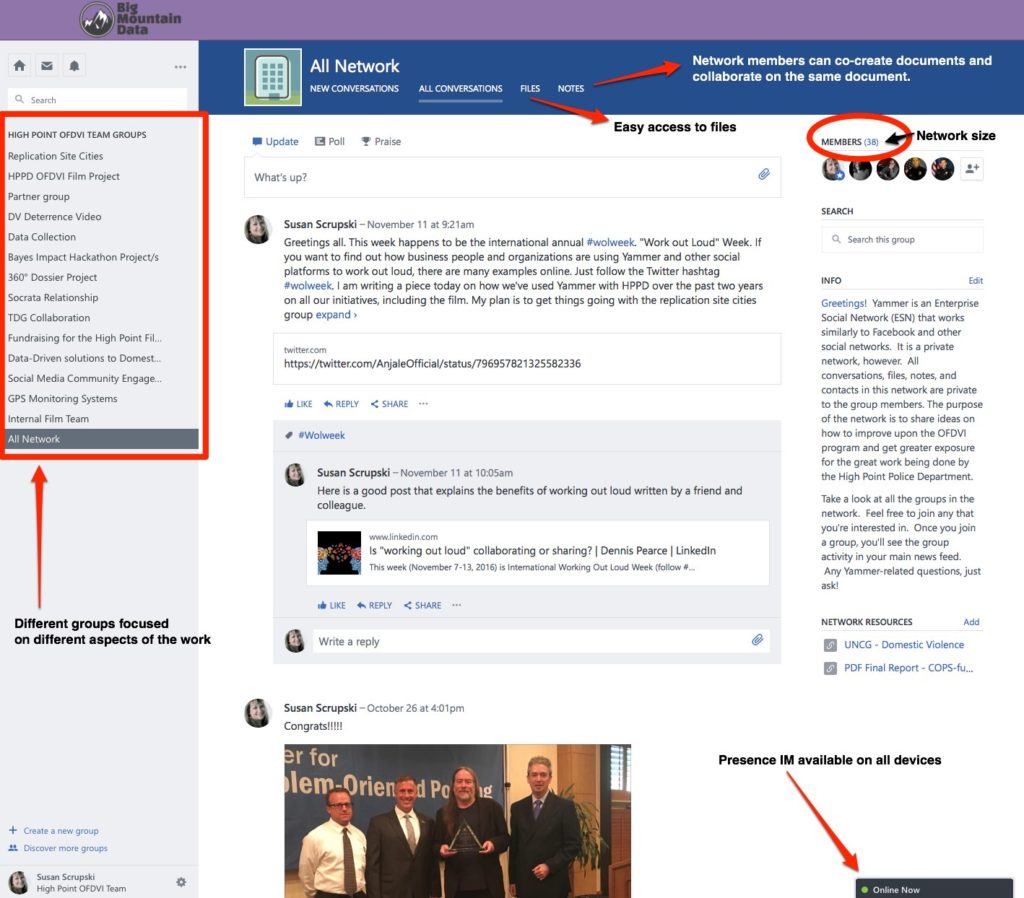 High Point’s current Police Chief, Ken Shultz, worked with us day-to-day for the first year or so on our various programs and initiatives as Deputy Chief.  I asked him if I could interview him on his experience with “working out loud.”  He was happy to comply.  “We’re used to working in groups.  We try to be very transparent with our community,” he said.  He admitted they weren’t sure what it would mean in time and resources to work so closely with us, but in hindsight, he said, “The work has been very successful.  The initial work we put in answering your questions has paid off drastically.”  He spoke at length about how our involvement bringing so many players together has helped the department expand and develop even better relationships within High Point.

You’re an outsider, but you’re seeing people who might have solutions for us; you’re bringing people in from outside and getting them involved. That’s something we would not have been able to do on our own.  We didn’t know who these people were; we didn’t have that ability to connect so the more people that have been participating in Yammer, the more connections we’ve had and the more resources have been thrown at us and the more support we’ve been able to have. – Chief Ken Shultz, High Point Police Department.

The magic of “working out loud” is the instantaneous access everyone has to the conversation, the explanations, the decision-making, and the answered questions that benefit everyone in the network.  In tech terms, we call it the “network effect” of the increased exponential value of the network’s shared knowledge with every added node.  In this case, the nodes are people with expertise to bring to bear on a difficult problem.  These are experts whose paths might not cross – ever in their careers.

The High Point Model has tremendous potential to make a serious difference on how communities address domestic violence. HPPD has going on six years of experience with this approach, and new sites are expressing interest in replicating what High Point has done, every day.  We’ve begun a “Replication Sites” group in Yammer where sites all across the country can join our network and learn from those already in some stage of progress.  Effectively, new agencies coast-to-coast now have access to the institutional knowledge already resident within our network with the added benefit of being able to ask direct questions to people on the ground making these changes in their communities. New nodes = greater intelligence and knowledge-sharing.

In an era where so many have become divided and intransigent, working out loud humanizes us.  It keeps the focus on the greater goal we all agree we want to achieve.  Solving the world’s toughest social problems will take a village of committed souls bound by a united interest.  Working out Loud provides a path and a way forward toward that end.