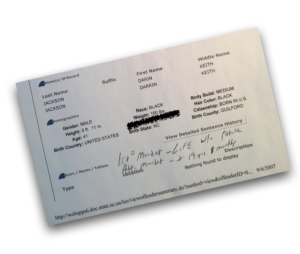 Jerry Thompson (now retired), kept a copy of Darin Jackson’s info sheet above his desk at all times. In the margin, he wrote his sentencing charges. Thompson, a domestic violence detective, wanted a constant reminder that the Darin Jacksons were still out there.

As if he could forget.

In 2007, Thompson and his fellow patrol officers walked into one of the bloodiest, most vile crime scenes imaginable. Jackson had nearly decapitated his ex-girlfriend, beating her with an angle iron and stabbing her 60–70 times. The local medical examiner told him he had never seen anything like it. Thompson says he still remembers blood dripping from the ceiling onto his shoulder at the victim’s home.

He will never unsee that homicide scene.

Jackson had stabbed her 8-year old son as he lay sleeping next to his mom. The child had to escape out a window while being stabbed– seeing, hearing his mother being murdered right in front of him. Traumatized, he showed up at the neighbor’s house covered in blood. The neighbor called 911, but it was too late for his Mom.

The info sheet on his wall was a reminder. Jerry told me that when things were hectic when they first started the agency’s progressive approach to IPV, he could look up and see this offender and remember how it was all about the abuser’s need for power and control. He explained, “The longer they have power and control over someone, the harder it is to break the cycle and the greater the chance of lethality or serious injury.” He went on to elaborate, “If we strip the power away from them earlier [in the progression of the abuse], and remove his anonymity, the better the chance the victim has that he won’t reoffend.”

How did High Point, N.C. become so successful with their nationally renowned program? They studied domestic violence. They analyzed over a decade’s worth of domestic data. They consulted with leading experts in criminal justice and victims’ rights. They called everyone down to the station who could be helpful to inform their understanding of this complex phenomenon. They built their program over a two-year period of intensive research. And then they trained, and practiced, and tweaked, and refined.

Today, Jerry Thompson could easily speak at any women’s conference on domestic violence. He could write a book. He is an expert on intimate partner violence. So is every one of the command staff today in High Point.

The police recognized that the victim is not the problem in domestic violence. She’s the target of the problem. The problem is the offender. And acts of violence and intimidation are criminal acts. Moreover, these dangerous offenders are a threat to public safety. They require a focused criminal justice response.

Two days ago there was a brutal domestic violence slaughter involving six people about 5 miles from where I’m writing this piece today. A woman died instantly and her father and two young sons sustained serious injuries. Today we heard one of the little boys, an 8-year old, didn’t make it. What I will remember most about this incident is how the color drained from the face of the Sanford Police Public Information Officer (PIO), Bianca Gillett, as she turned to address a wall of reporters to explain what had just happened. “This is one of the most horrific crime scenes our officers and investigators have had to encounter,” she said with remorse.

“This is one of the most horrific crime scenes our officers and investigators have had to encounter.” — PIO Bianca Gillett, Sanford Police.

It’s time. There is a solution that is working to end domestic violence. Let’s give it a try in every county, every city, every town, every neighborhood. So living rooms won’t drip with the blood of victims whose death could have been prevented and little boys don’t have to wake up to murder.